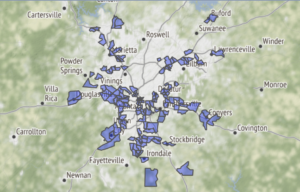 The data say that 21% of Atlantans live in low-income neighborhoods with limited access to fresh food. We want to tell this story because these challenges are not receiving enough attention in major Southern urban areas, where the issue is particularly acute. For this project, we used the USDA Food Research Atlas, and restricted to our census tracts of interest (everything within Fulton County).

We take on the role of a small group of food security advocates within the Atlanta Mayor’s office — we would have recently worked on initiatives to expand food access to underserved areas. For this particular activity, though, our goal is to get more people within the Mayor’s staff (public health experts, staff working on low-income issues, chamber of commerce liaisons) to pay attention to this particular challenge and ultimately, to move towards creating a Mayor’s Office of Food Access similar to those that already exist in a few major cities across America. As such, the context of this activity is a workshop at an annual conference amongst executives within Atlanta’s Mayor’s Office.

The activity goes as follows: in our class of 15, we break people out into groups proportional to the county breakouts by type of food access (along the dimensions of access and income). To access each of their treats, Groups A, B, C, and D all have to accomplish different tasks (For example, group A, the high-income/high-access group just gets their treat at the door, but group D, the low-income, low-access group must do 15 jumping jacks and then walk up to the fourth floor for their treat).

We hope this game is effective on a few lines: for one, it is meant to generate empathy with the daily challenges of the individual, but also, when everyone comes back, characterize the sheer size of the problem: 3 of 15 people coming back panting when another 6 barely had to leave the room helps plot the data across an axis of humans. Finally, we hope that the embodiment will both spark discussion and encourage action (in this case by working to launch a food office).