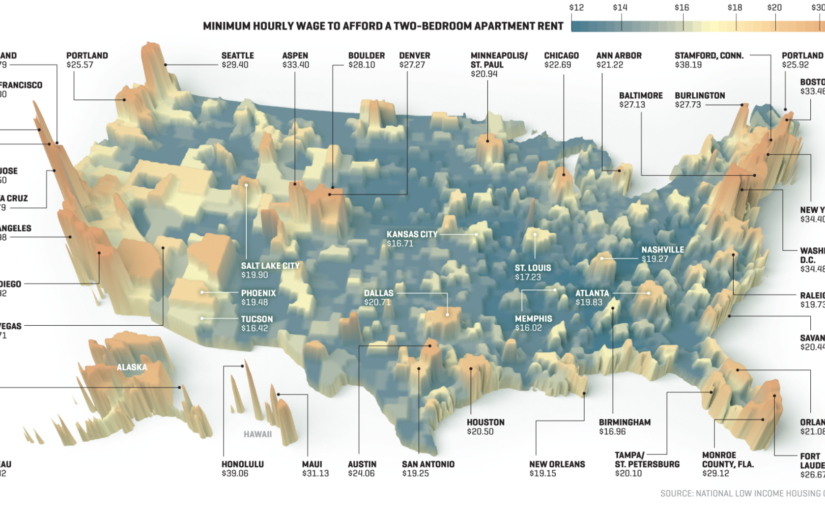 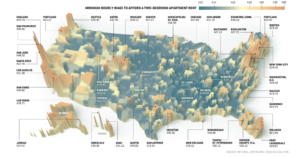 Nicholas Rapp and Matthew Heimer released a set of visualizations on Fortune this past December illustrating different metrics to understand the economic status of the American middle class amidst growing economic inequality. The map pictured above depicts the “housing wage,” or hourly wage needed by a renter to afford the rent for a 2-bedroom apartment at the Fair Market Rent (FMR) in different cities across the country.

The intended audience here is anyone who would consider themselves a member of the middle class. We know from recent studies that many more Americans believe themselves to be middle class than are in actuality, and this viz capitalizes on that outsized identification by not defining what it means by the “middle class” in income, employment, or other economic terms.

The goal of this project is to demonstrate just how economically burdened middle class Americans are as the rich grow richer. The additional graphs and charts shown in this feature show America’s “awkward global company” in being a highly unequal developed country, and how the economic standing of the American middle class has degraded over the years in terms of personal savings, retirement savings, and purchasing power.

Though I think the housing wage map is evocative, it left me with more questions than answers about the state of housing for the middle class in different US cities.  The housing wage is depicted by the height of the skyscraper over the city, which is not the clearest symbology visually: the differences do not render well across all cases, and are mostly useful in understanding the extreme outliers (San Francisco, Seattle, NYC, etc.). The color gradient is organized from low to high required hourly wages, which is logical, but the shades of blue and orange at the bottom and top of the gradient respectively are not so easily deciphered with the naked eye and comparing heights of skyscrapers for cities not geographically near one another is also challenging.

I would appreciate more context with this data, since its ultimate goal is to generalize across a class of people. Including data about how many residents achieve this hourly wage level would be helpful to understand how inclusive the housing market is of the middle class. The available documentation do not help in answering some of my questions because I have a feeling the data were compiled at different geographies (e.g. the map indicates cities, but Area Median Income (AMI) is measured at the metro level). While the map is no doubt beautiful, and is admirable for labeling large and small cities across the country (despite choosing symbology that best serves the outliers), I found its symbology more confusing than visually inventive.